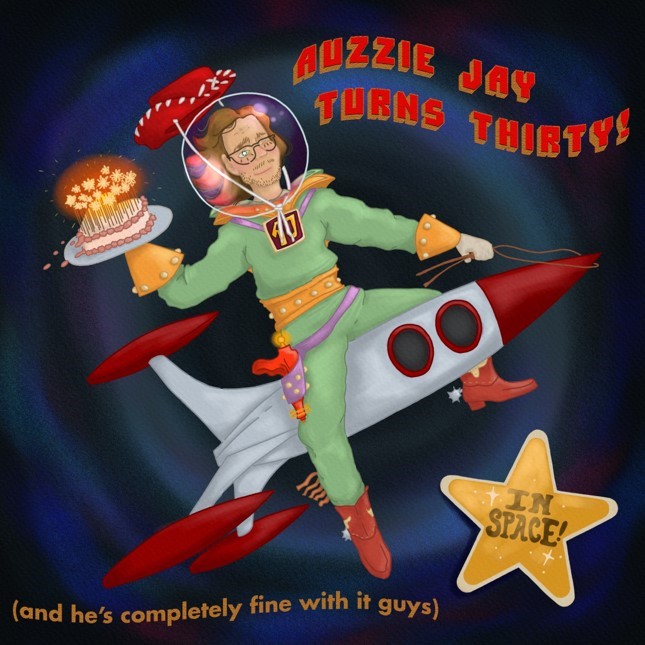 Auzzie Jay is turning thirty and you're invited! Suit up and get ready to slingshot through the stars with a narrative album that is OUT OF THIS WORLD!

AUZZIE JAY TURNS THIRTY (AND HE'S COMPLETELY FINE WITH IT GUYS) IN SPACE! is a narrative album that features dialogue, atmospheric tracks and of course music! Releases on Auzzie's birthday- JULY 1ST with special bonus content on AUZZIEJAY.COM

Dandelion Wine is a song about enjoying Summer on an idyllic planet called Dandelion-Nine. It recalls imagery of my own summers past, while repeating the same phrases over and over to recall summer ear worms.

The Inevitable Heat Death of the Multiverse - Dialogue

Ahh- what could be better than chillaxin' on a planet made of giant Dandelions?

B.B. is a reference to Bonzi Buddy- the voice that BB uses is the same voice that Bonzi Buddy used to use with a vocorder. It is also a cute name that we gave our Sharpei Butterscotch.

B.B. takes Auzzie Jay to a fantastical ramen shop at the edge of Andromeda B. If you listen closely you'll hear many sounds in this atmospheric track.

To the nearest black hole? Auzzie isn't thinking straight. While it is true that you virtually won't age if you travel 99.99% the speed of light- but it will also take infinite mass- silly Auzzie!

I'll be honest I wrote this song in about 10 minutes but it's one of my favorites on the whole album.

Uh-Oh! Who could have saw this coming?!

This is supposed to be a funky and odd type of groove that draws inspiration from savage garden.

Where You're Supposed To Be - Dialogue

A play on the idea of the eternal reoccurence or the idea that everything in the universe is repeating and will repeat infinitely. There is peace to be found in this idea and also some interesting concerns.

Don't think about it too much.

Drawing on vintage science fiction sounds like the theramin I wanted to make a disco/house type beat utilizing the same vibe. I really enjoyed making this theme and wanted the reprise to be for those that thought the first one ended to soon and it has some extra layering!